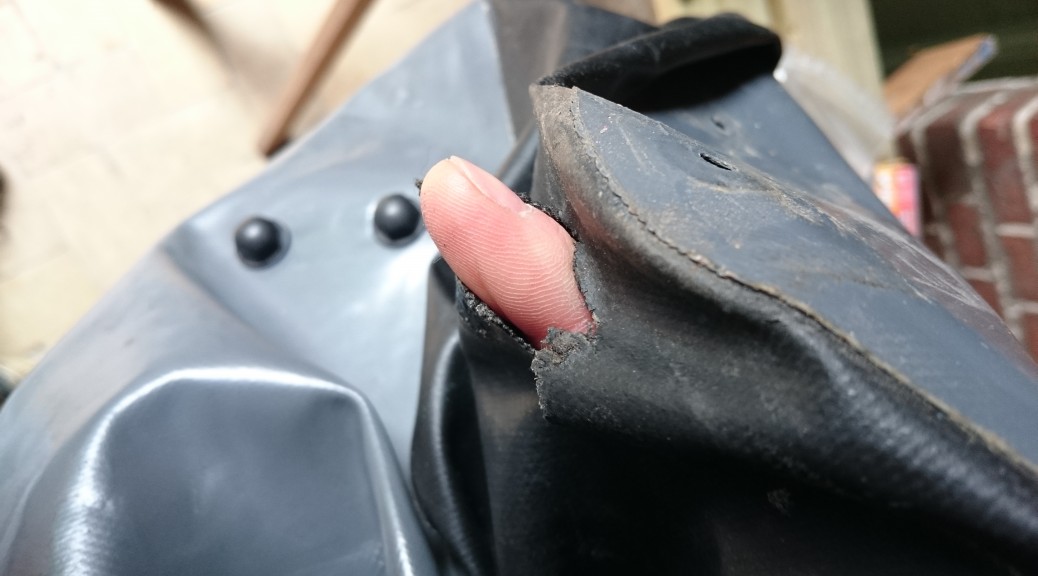 Traveling on bike means you are exposed to all kinds of weather. Usually, weather-worries tend to focus on the possibility of wet conditions, making waterproof bags and panniers the cyclists’ “wet dream”. Waterproof panniers made from PVC/PU-lined fabric with welded seams by german Ortlieb have long been the prefered kit for bike world travelers and rain-or-shine commuters.

Having used my Ortlieb panniers for almost every bike trip the last 10 years, carrying everything – from the laptop and papers on the daily commute to the office, carrying powertools, touring, and everyday shopping.

What finally did my panniers in was carrying binders with study literature. The metal reinforcement on the binders simply cut a hole in the bottom corner of the pannier as I put them on the floor.

You might argue that a hole in the bottom of the pannier is acctually not  critical since it provides important ventilation, thus keeps your clothes from becomming stuffy. Anyhow, it is like a bucket with a hole…

Luckily you can buy repair-kits for your panniers, and breathe another ten – or so – years of life into them, saving the environment for the production and transport of new ones (eventhough the new ones come in such nice colours and with new fittings.

The environmental side of repairing the panniers might be outweighed by the glue, that smells like thinner and chemical industry together. But then, my panniers are made of PVC which is defined as hazardous trash, and has to be disposed properly of and since I already have them there is little need in buying new ones.

Then the only thing that is left now, is waiting 24 hours for the glue to harden, then patch the outside, and reasemble the whole thing.

It is not really a quick patch, you apply on the go.