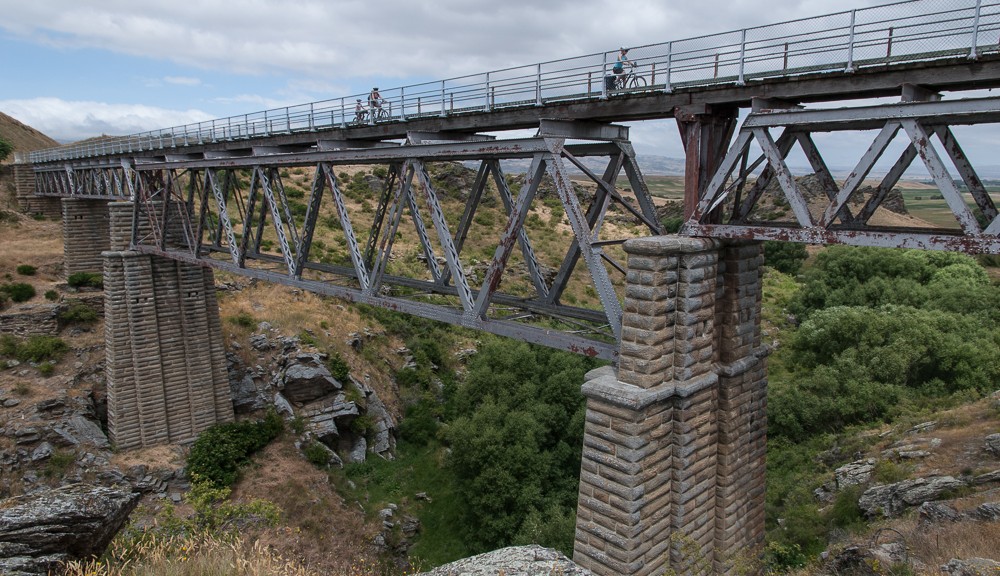 New Zealand has a magnificient landscape of which you can assure yourself by watching Lord of the Rings. So the prospect of cycling in a landscape of that diversity and grandeur is a dream come true.

While planning the trip, I noted that the only cycling guide from Lonely Planet acctually was on New Zealand, so: “a perfect spot for a cycling vacation with the family”, was my initial thought.

Luckily, we added up the kms needed to visit the sights we wanted to see on the South Island, and realized that renting a car would be more sensible as we were going the whole family. So we picked the one “unmissable” trek for our cycling needs, following the advice from Lonely Planet – and numerous online sources – and went for the Central Otago Rail Trail.

To be honest, we only rode half of the trails 150 km, as our rather tight schedule for the round trip of New Zealand’s South Island didn’t allow more. It was the best half, of course. The half with the tunnels and bridges, and going downhill.

Discussing the state of kiwi-cycling with cycling advocates in Auckland proved the point that the Lonely Planet guide book may be overly optimistic, since cycling in the urban areas still is mainly for enthusiasts, and distances are rather big – since most traffic planning is made mainly with cars in mind.

As we drove our car around on the South Island, the verdict on cycle-friendliness was: “not so much”. Most car drivers are considerate, but most the Island’s roads are rather narrow. I was happy having been pragmatic, and not having to cycle on the edge of the road with cars going 90 kmh on the right and an abyss (or mountain wall) on the left with my family…

Cyclists, whom I asked about the cycling experience, loved the landscape, but found mainly the infrastructure tough to handle. Even a well equipped swiss randonneur, who had cycled throughout Europe, US,  and Asia, found the roads and the traffic challenging.

The Central Otago Rail Trail, on the other hand, is car free. A former rail track, where you cycle on the rail bed over rail bridges, and through rail tunnels, stopping at former railway stations.

The lure of converting rail tracks into cycle trails is that rail tracks are generally flat, with no steep climbs or descents, making them ideal for recreational cycling. In Europe rail-to-bike-trail-conversions are known under the name “Greenways”.

The Rail Trail opened in 2000 and attracts around 12000 visitors annually. The trail forms a crescent starting in Middlemarch (at 200 m above sea), going up hill peaking at 600 m altitude at Wedderburn and ending down hill in Clyde at, roughly, 200 m above sea.

We started our tour of the Trail just after the peak, in the historic city Oturehua, and had scheduled 25 km per day. Advices on the difficulty of the trail differ from source to source, from “doing the trail” in one day to travelling it in 5 or 6 days. For a family with kids of 10 and 6, cycling on unfamiliar bikes on a rather rough surface, the 25 km proved to be fine, also leaving time to enjoy the surroundings and for the kids to play with other kids at the camp site.

The trail is build on the rail beds’ grawel and stones, which gives a certain charm and rustiqueness, most of the time the track has been smothed-out with gravel, but on certain segments of the trail it seemed as if the sleepers of the rail track had been removed and left it to the cyclists to even out the track, giving a rather rough and bumpy experience, keeping the trails railway-heritage extremely present.

For the kids, the rail-heritage was also kept present by buying the “Otago Central Rail Trail Passport” where you could stamp the pages at stations on your way. Spotting the small red lockers soon was a favorite sport, eventhough the younger of the kids was limited in her search by  sitting on a

tow-bike. And after the trip, the booklet is a nice souvenir with short presentations of the stations and towns on the way.

In most presentations, the lack of supplies is emphasised, and this is acctually something to keep in mind, as there are no supplies of food or water along the trail, apart from the shops and cafees. We passed two toilets set up by The Departement of Conservation, but they were both lacking toiletpaper at the time we passed them. Bringing your own toiletpaper might not be such a bad idea…

Coming from Denmark, as I am, off course you seem to be spoiled in regards of perfected cycle infrastructure, but even the danes – especially danish tourism – can learn a lot from the services build around the Rail Trail. You can argue the huge difference in the state of cycling is important. Yes and no. The danes might be used to cycle, have their own bike and stuff, but tourists coming to Denmark might not.

Transportation: Try having your bike and luggage transported in Denmark. It is a hassle if possible, but it rarely is.

Perfection: Danish recreational trails tend to be made as smooth as a german Autobahn. The Rail Trail proves that it might not be necessary to plaster the trail with the perfect road surface to attract guests from all over the world, but then, it might be too rough at times. the keyword is “comfortable enough”. In Denmark you can even find cycle routes with surfaces that are impossible to cycle on…

The stunning, mountaneus landscape, Denmark can’t compete with, nor copy, but the way to engage and revive the local communities by enabling the trail is something that could bring more recreational cyclists

When to go? We rode the track in january, which is early summer in NZ. In the spring/fall the weather is even more unstable than in the summer, where we experienced both dry heat with temperatures around 25 degrees celsius, sudden rain, and windy chills, on only two days

Helmets – yes, always an issue – are compulsory by law.

Luggage – one bag with tent and sleeping bags – was transported to a campsite in Omakau. We rented bikes,  transportation of ourselves and the luggage item from Trail Journeys (www.trailjourneys.co.nz) providing a good service, but for my taste, the bikes were too tall, and tires to slim for the track. A mountainbike with fatter tires would have been more apropriate in my opinon.

Disclaimer: The tour was not sponsored by any meassure or means.